Further information about Magrathea may also be found in CESNET technical report 25/2007.

The name comes from The Hitchhiker's Guide to the Galaxy written by Douglas Adams. Magrathea is a planet where other planets, such as Earth, are built for wealthy-enough creatures, such as mice.

Magrathea consists of three main components: master process representing physical machines, slave processes running in each virtual machine and optional cache process, storing information about status of all virtual machines running on a cluster. Architecture of Magrathea and interaction with resource management system and virtual machine monitor is depicted in the following figure: 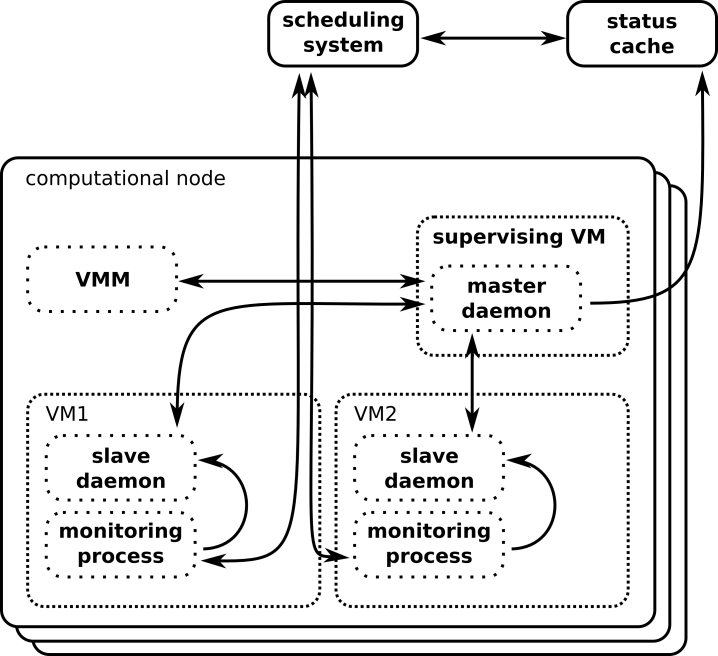 Runs on each real machine and manages all virtual worker nodes running on the same machine and stores their current status at the status cache. The status cache is updated whenever the status is changed and even when no change occurs within a predefined time period.

Runs on each virtual worker node and asks its master daemon for permission to start a new job, informs the master about finished jobs and behaves according to commands received from the master.

Stores status data about all virtual worker nodes so that a batch scheduling system does not have to contact each node to check its current status before making a decision where to execute a job. This part is not required when a scheduling system is able to get status information directly from computational nodes. However, the status cache is a more scalable solution.

Source code of Magrathea with administrator's documentation is available as "magrathea" module in METACenter CVS repository.